IS OUTSOURCED LEARNING A SOLUTION TO THE EDUCATION CRISIS IN AFRICA? 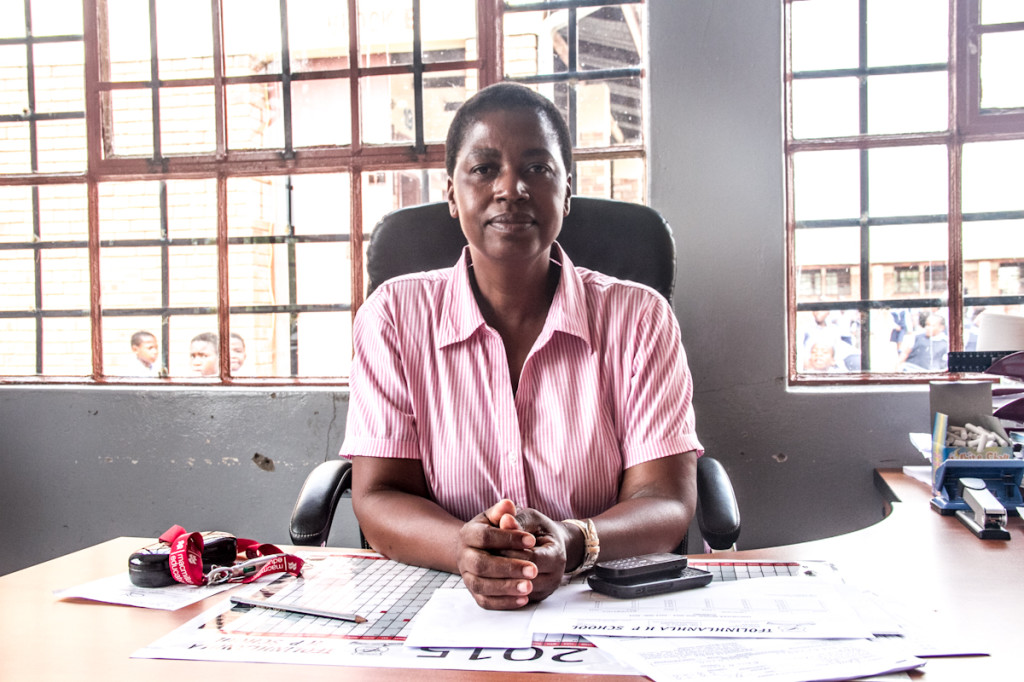 In 2013, Cicilia Sambo, Principal of Tfolinhlanhla Primary School in rural Mpumalanga Province, made an unprecedented move. She outsourced learning.

The decision has led to a 30 percent leap in Tfolinhlanhla’s Grade 4 mathematics result and a 39 percent leap in the English language result compared to the class of 2012.

The opportunity for Sambo to outsource learning coincided with the establishment of the Hazyview Digital Learning Centre (HDLC) – a high-tech hub of digital learning and skills development – run by South African NGO, Good Work Foundation (GWF).

Many of Tfolinhlanhla Primary School’s learners were part of a well-known Orphans and Vulnerable Children (OVC) Programme that is operated by Hosanna Church, located next to HDLC in Shabalala village. In the afternoons, the OVC group would use HDLC’s facilities; the tablets in the barn were loaded with English second language and mathematics apps, and the classrooms and desktop computers were made available for homework support and project research.

“I noticed improvements in the OVC kids that attended our school,” says Sambo. “Not only reduced absenteeism, but an openness to want to learn. The reading improved dramatically, and that had a knock-on effect. The kids wanted to engage and you could see that.”

In August 2013, Principal Sambo, together with Crispen Bvumbghe (Head of Open Learning at HDLC) proposed an Open Learning model that would allow Tfolinhlanhla Primary School to outsource two hours of learning per week to HDLC for all Grade 4 learners.

The model would focus on dramatically improving a rural child’s ability to learn what GWF refers to as the “the languages of access” – English, digital literacy and mathematics.

“The Annual National Assessment results for the Grade 4’s were poor in 2011 and 2012,” says Sambo. “In 2013 we saw a staggering jump in English language, over 20 percent in fact, and in 2014, our Grade 4’s achieved an average of 77 percent for mathematics, compared to 40 percent in 2012. We are now one of the top performing schools in the district and our results are on a par with semi-private Model C schools.”

Seven schools are now outsourcing supplementary digital learning (with a focus on English and mathematics literacy) to HDLC, many of those on Principal Sambo’s recommendation.

A phase two rollout of the model plans to reach 10,000 schoolchildren by January 2016 and, with the requisite financial support, the model can be scaled to reach in excess of 100,000 students within 12 to 18 months.

Well-know South African conservationist and GWF Chairman, Dave Varty, has been assisting on the development of the Open Learning model for over three years. “I have worked in rural areas all my life,” he says, “and it’s time to accept that we cannot build a computer lab in every school or up-skill teachers quickly enough. This model obviates the need to do either of those two things and instantly provides remote communities with access to world-class education for a relatively small capital investment. We’re talking R250 per learner per year. For a 30 percent improvement in English and mathematics, that’s exceptional delivery of value.”

After working on a number of community-focused projects in rural Africa, GWF CEO, Kate Groch, set out to create this “hub and satellite” model so that it could be replicated across rural Africa and managed by the local people that each hub serves.

“Principal Sambo has been a true pioneer,” says Groch. “It is not easy to be the one to stand up and say: ‘we have problems with space, with funding, with access to digital literacy, and with our results’. It’s not easy to be the one who stands up and says: ‘we need help.’ Principal Sambo did that, and, together, we are seeing a result that will shift the future of an entire generation.”

According to Sambo, “jobs aren’t lacking in our country. What’s lacking is creativity. We need to connect young people to the future, and not limit them to what we have always known in rural areas. This model connects people to a future beyond our village.” 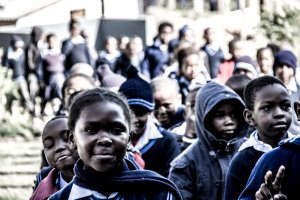 The best part of their week: children from Tfolinhlanhla Primary School line-up outside the Open Learning Academy in rural Mpumalanga. 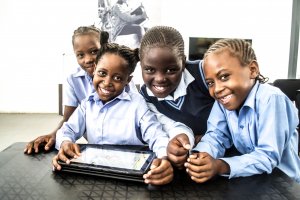 A group of Grade 4 schoolgirls from Tfolinhlanhla playing word search.